Since the accident, the Japan-America Society of Hawaii (JASH) has held, annually, a memorial ceremony attended by many guests from Japan, as well as members of the local community. This year, due to the COVID-19 restrictions on gatherings, the ceremony was scaled down, compared to years past.

At this year’s private ceremony, participants observed a moment of silence and laid flower leis in front of the memorial.

The ceremony was filmed and will be shared with the families of the deceased, and others involved in Japan who were unable to attend this year.

In a video message to be included in the recorded program, Consul General Aoki offered his condolences for the lives lost in the tragic accident. He also expressed his gratitude to the countless people in both Hawaii and Japan for their efforts, including search, rescue and recovery operations in the aftermath of incident; the erecting of the Ehime Maru Memorial; and the strengthening of the relationship between Hawaii and Ehime, and between Honolulu and Uwajima.

The public will be able to view the video on JASH’s website.

Separately, on the day of the ceremony, Consul General Aoki and consulate staff members visited the Ehime Maru Memorial, laid a wreath and offered a silent prayer. 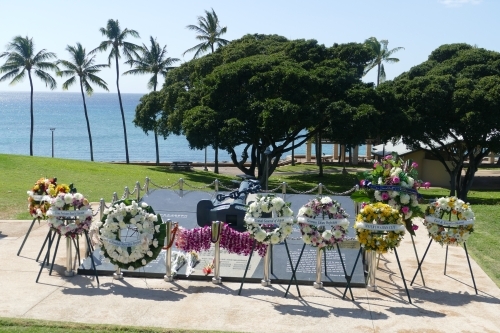 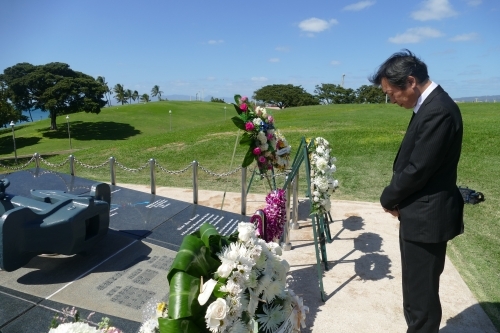