On Thursday, March 4, 2021, at the Consul General’s official residence, Mr. Thomas Nobuo Hasebe was conferred the 2020 Fall Imperial Decoration, The Order of the Rising Sun, Gold Rays with Rosette, for his contributions in promoting the cooperation program between the Japan Air Self Defense Force (JASDF) and the United States Air Force (USAF) as a military officer and as a civilian officer of USAF.
Mr. Hasebe has been engaged with the defense personnel exchange program between JASDF and USAF as the Chief of Indo-Pacific Military Personnel Exchange Program/Overseas Developmental Education Operations & Continuity, Department of Air Force. Specifically, he has been actively engaged in the coordination between JASDF and USAF to dispatch USAF officers to JASDF and to accept JASDF officers to USAF. Through his contributions, many officers from both Japan and the United States were able to participate in these exchanges, and his work continues to enhance the good relationship between JASDF and USAF and improve JASDF’s capabilities.
The program of the Conferment Ceremony was as follows:
1) Opening Remarks - Consul General Yutaka Aoki
2) Conferring the Decoration - Consul General Yutaka Aoki
3) Recipient’s Speech - Mr. Thomas Hasebe
4) Guest’s Speech - Col. Kohei Kurachi
(Including reading a congratulatory letter from JASDF)
Mr. Thomas Nobuo Hasebe shared his experiences as the Chief of Indo-Pacific Military Personnel Exchange Program with the defense personnel exchange program between JASDF and USAF.
In his speech, he conveyed his gratitude to JASDF and USAF and to his family, especially to his brother, who gave him an opportunity to aim for USAF and also to his wife who supported him for years to attain this great honor.
Note: Due to the COVID-19 pandemic restrictions, the conferment ceremony was held with a limited number of attendees. 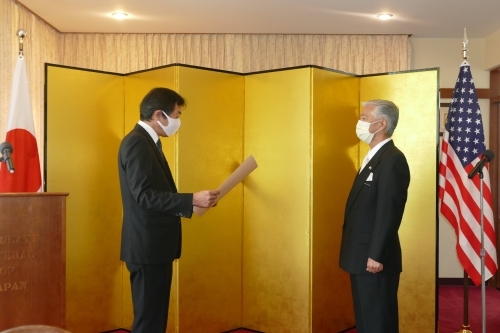 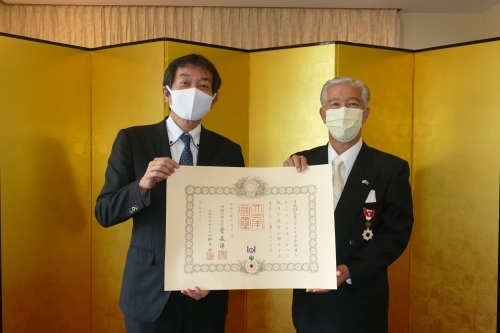