As part of a deep sea training voyage, the Japan Coast Guard training ship Kojima arrived at Honolulu Harbor on Saturday, June 19th. After a three day visit, Kojima left port to carry out the last leg of its training program on Monday, June 21st.

Kojima is manned by a full crew of 83 personnel, including 46 trainees who just graduated from the Japan Coast Guard Academy in March, 36 crew members and a medical services officer.

Kojima embarked on a deep sea training voyage from its homeport of Kure, Hiroshima on June 8th. As the first leg of its voyage, the vessel proceeded to Honolulu, and after departing Honolulu, headed to Koror in the Palau Republic. Kojima is scheduled to arrive in Koror on July 9th and return to Kure on July 15th.

After Kojima docked in Honolulu Harbor on June 19th, Consul General Aoki boarded the ship, greeted the trainees and delivered a lecture based on his own experience with the Japan Coast Guard and the Ministry of Foreign Affairs of Japan on maritime safety. He also introduced the history of Hawaii and Japan starting with Japanese immigration and shared a video message from members of the Hawaii Meijikai, United Japanese Society of Hawaii and the Japan-America Society of Hawaii. Although the members of these organizations could not board the ship, they gathered at Honolulu Harbor to welcome the trainees and crew when they arrived, and bid them farewell when they departed.

Due to coronavirus-related restrictions, Kojima had to cancel its onboard reception during its visit, and the crew was not allowed to disembark from the vessel. 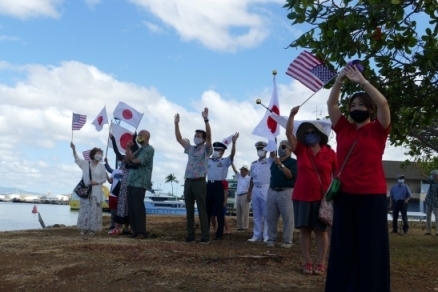 (CG Aoki greets the trainees and crew of Kojima) 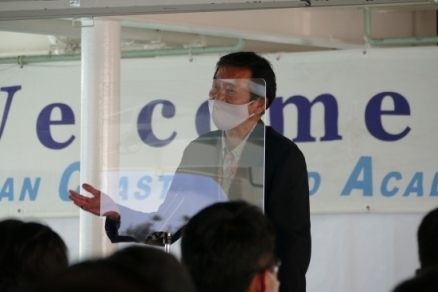 (CG Aoki gives a lecture on board of Kojima)