2021/1/8
(Honolulu) – Imagine settling in with a cheese board, some wine, and good company. A few hundred others join you, and yet you've got front row seating for an artist you've recently discovered, or perhaps, of whom you are already a longtime fan.

On Friday, January 29 in Hawaii, and Saturday, January 30 in Japan, the Honorable Consul General Aoki will host the first-ever Rainbow Harmonics from his residence in Honolulu. His guests will include Lisa Ono, Brazil-born Japanese-Brazilian national known for her soulful Bossa Nova and cross-genre vocals. Local talent and artist Sandy Tsukiyama of Hawaii Public Radio fame will also join to chat. The event will also be co-hosted and moderated by Sascha Koki in both English and Japanese.

Rainbow Harmonics: the concert and chat is a laidback, Hawaii-style show with global appeal. The Consulate General of Japan in Honolulu seeks to build a stronger bond through a medium with no borders: music. The mission is to contribute to a global society's harmony through human connection and the Aloha Spirit. The special guests set to appear have special ties to both Hawaii and Japan and will conversing in both English and Japanese with music by Lisa Ono sprinkled throughout.

The event is free to the general public and will be live-streamed on YouTube via the official channel (https://www.youtube.com/channel/UCnd_B4cPylh-UtNfyEbBTbA), accessible via the Consulate General's website, www.honolulu.us.emb-japan.go.jp. No advance reservation is required.

Born in Sao Paulo, Brazil, Lisa Ono spent her childhood in Brazil until 10 when she moved to Japan. At 15, she began singing and playing the guitar, and her debut as a professional Bossa Nova singer in 1989. Her natural voice, rhythmic guitar playing, and charming smile led her to massive success and contributed to the rise in Bossa Nova's popularity in Japan. She has performed with many top musicians, such as the legendary Antonio Carlos Jobim, the Jazz Samba giant Joao Donato. She continues to book shows in New York, Brazil, and across Asia. The album "Dream," released in 1999, sold out 200,000 copies in Japan and had released over 25 albums in her expansive musical career.

A Honolulu native, Sandy Tsukiyama grew up in a musical household. She discovered Spanish language and Music Theory at her alma mater, Roosevelt High School, and received a BA in Ethnomusicology from the University of Hawaii at Manoa. At UH, she continued in Spanish and began studying Brazilian Portuguese. Fascinated by bossa nova on radio jazz programs, she embarked on a
quest to investigate Brazil's music further. Her first vocal gigs were with the Brazilian-inspired group "Ohta-San's New Thing" and the Ebbtides in 1975. She is currently the host of "The Brazilian Experience" on Hawaii Public Radio. She can tap into her ethnomusicology background while sharing her own Brazilian experience with the community and beyond.

If you would like more information about Rainbow Harmonics, or any of the products mentioned,
please call Sascha at (808) 922-8974, or email her at sascha@mediaetc.net. 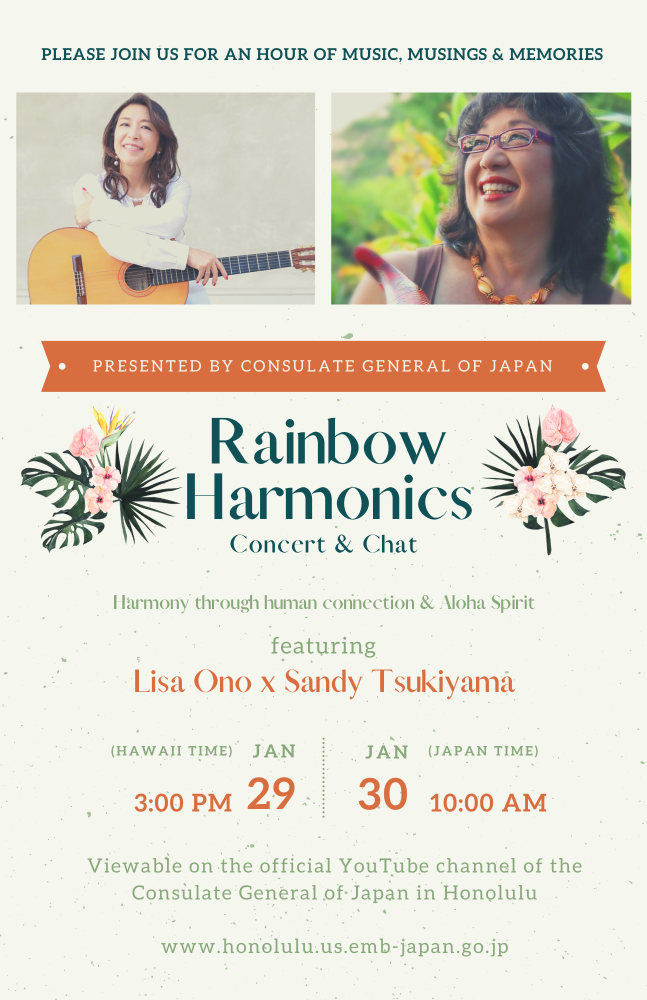